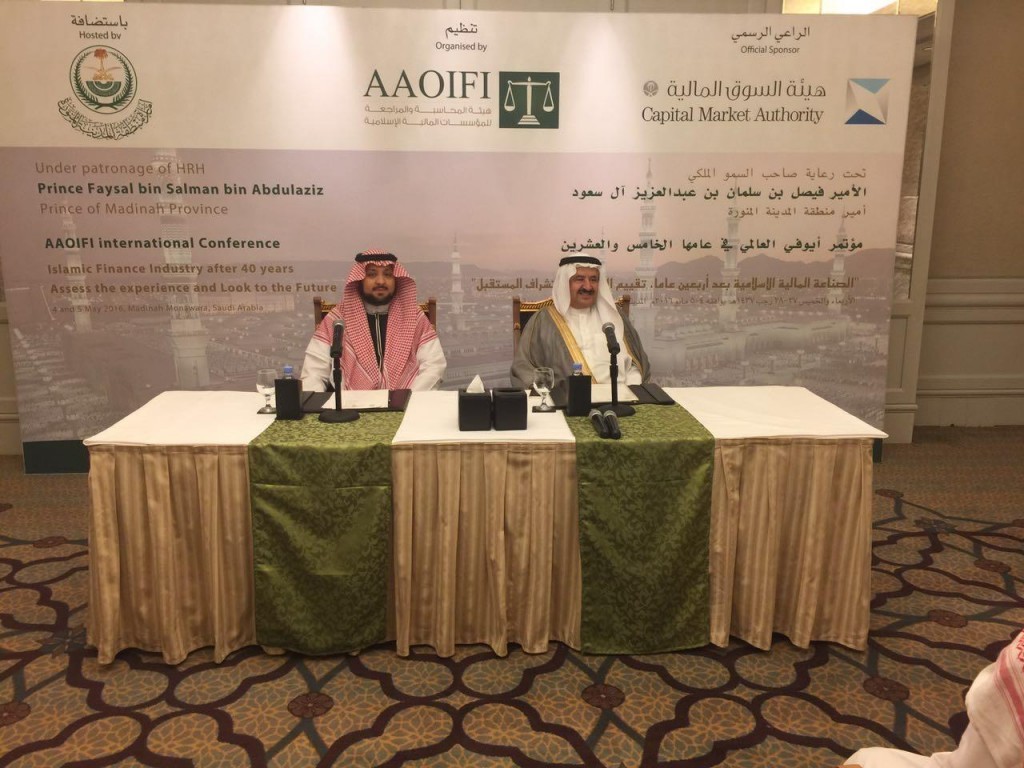 Accounting and Auditing Organization for Islamic Financial Institutions (AAOIFI) has held a press conference today morning, 20 March 2016, in Riyadh, Kingdom of Saudi Arabia, at which it officially announced that it will convene its 25th Anniversary International Conference under the title “the Islamic Finance Industry, 40 Years Since Inception: Revaluation of the Experience and the Way Forward” on Wednesday and Thursday, 4-5 May 2016. The conference is supported and hosted by Emirate of Al-Madinah Al-Manwwarah Province, and under auspices of HRH Prince Faisal Bin Salman Bin Abdul Aziz Al Saud, Emir of Al-Madinah Al-Munawwrah Province, and is officially sponsored by the Capital Market Authority (CMA).

In this regard, H.E Shaikh Ebrahim Bin Khalifah Al Khalifa (Chairman of AAOIFI’s Board of Trustees, and former Minister of Housing, Kingdom of Bahrain) said: “As AAOIFI has turned 25 years (since inception), in culmination of its wide experience, as an autonomous nonprofit standards setter organization for the global Islamic Finance Industry, in the area of international conference convention and organization with respect to the Islamic Finance Industry; AAOIFI was keen to pursue the convention of an international Islamic finance and economics conference in al-Madinah al-Munawwarah. This was culminated by a Noble Royal Order giving approval to the convention of this conference which will feature, as speakers and participants, a distinguished host of senior officials, lead thinkers, prominent scholars, and experts from the Islamic finance industry, from around the globe”.

Dr. Hamed Hassan Merah, Secretary General of AAOIFI, added: “As four decades have passed since the Islamic finance industry first came into existence, time is proper for AAOIFI, armored with a vast arsenal of experience and reliability, to spearhead an initiative aiming to revisit the history of the Islamic finance industry in order to evaluate its experience and lay hand on its strengths for improvement, and its weaknesses and failures for remedial action, and then to contemplate the way forward for this industry.

This conference will address a number of important topics and discussions by a distinguished group of scholars and experts, including a succession of discussion panels hosting early pioneers and entrepreneurs who left their remarkable fingerprints as to convert blueprints and aspirations into a great reality and a growth rate exceeding that of most economic sectors worldwide. This aims to revisit and document the beginnings and early stages and evaluate current reality through the lens of early pioneers, with an overarching objective of preserving this great chronicle and heritage before it is too late.

These sessions will be moderated through direct dialogue with guests according to preset topics, and then the floor will be open to audience to directly discuss and discourse with these pioneers.

Dr. Merah also lauded the great support given by the Emirate of al-Madinah al-Munawwarah and the Capital Market Authority towards successful convention of this conference, and towards bringing it into global prominence as a major professional event.