The volume of Shari’ah Standards has become the most prominent compilation of contemporary Fiqh reasoning in the area of Fiqh al-Mua’amalt (Jurisprudence of Financial Transactions) around the globe. The standards cover a large array of Islamic financial contracts and products, including those pertaining to banking, Islamic insurance, investment banking, capital markets, financing, and so on.
These standards are widely popular in the global Islamic finance industry, and are deemed the most outstanding Shari’ah reference for that industry, including legislative bodies, regulatory authorities, and financial institutions, and other professional entities such as law firms, accounting and consultancy firms, in addition to universities, academic institutions and research centers and Fatwa-issuing bodies.
Currently, AAOIFI standards are officially adopted by a number of central banks and financial authorities on a mandatory basis or as guidance. Hence, these standards are rightfully a major hallmark for the Islamic finance industry and one its principal accomplishments. 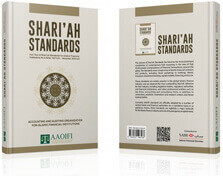 In addition, AAOIFI Shari’ah standards have also been used as a basis of national Shari’ah guidelines in jurisdictions such as Indonesia and Malaysia.